5 Ideal Qualities of the “Modern Boss” 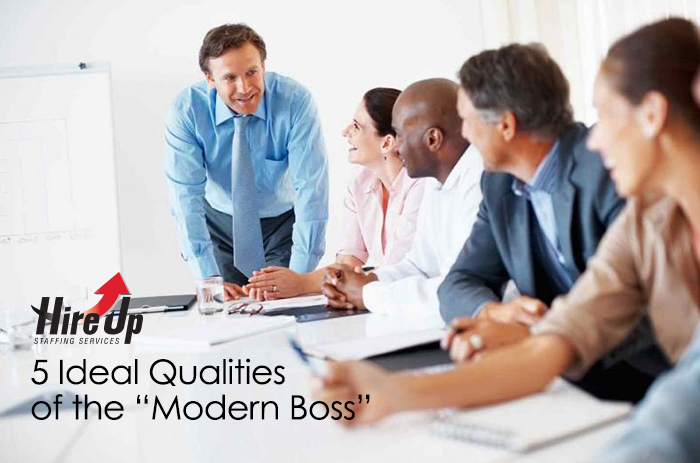 There was a time when the word “boss” had a really negative ring to it. These days, however, bosses no longer have to fall under the stereotype that company leaders give off a really bad vibe, thought highly of themselves, or looked down upon their employees.

Today’s leaders are driven, dedicated, and often well-liked. So how do managers, CEOs, and top professionals become this? Here are a few pointers, from the employees’ perspective:

Serves Others, Not Just Themselves

For today’s working class, their leader should be selfless. They focus on the people and their successes. The reason behind this is that when employees excel, so does the company. It’s a good type of chain reaction that benefits everybody. When a struggling employee gets the right kind of push and becomes extraordinary at what they do, congratulate them! This constant feedback not only gives them that pat on the back that they deserve, but would most probably encourage them to keep going for the gold all the time.

The days of opinions going down a one-way street are all gone. Today’s businesses thrive when a company’s leadership not only gives out superb work ethics, but also hears out what the employees have to say. It’s important to communicate effectively, both ways. If someone has concerns, listen and take action, even if it’s just them suggesting how to make the workplace look a little nicer. It could make all the difference for them.

No employee would want to work for a person who isn’t passionate about their industry, product, or company. When a leader truly loves what they do, it shows. This enthusiasm and thirst for knowledge is highly contagious, and it will rub off on everybody else in an office.

Let’s face it – there are still some people out there who either takes all the credit, denies all the blame, or both. A good leader is someone who gives credit where it’s due, and helps a team rise from any bad situation. Instead of glorifying themselves during good times or playing the blame game when something goes awry, it’s the leaders who take the high road (and have their teams or employees at their side) that people really admire.

Brings Out the Best In Everyone

In general, the modern boss is someone who inspires, enables, and collaborates. Instead of ruling by fear, making people do their jobs “because they have to,” an ideal leader in today’s world leads everybody, including themselves, toward a definite goal. A lot of workplaces now have an “open door policy” so people can, within reason, speak freely with a company’s leaders regarding their concerns. Some companies don’t even give leaders traditional giant offices, and rather let them sit at cubicles with everyone, for better interaction and less intimidation.

Here’s a saying that sums it all up for us:

A boss only sees things in black and white, while the leader also sees the grey