Allow Social Media at Work? 5 Reasons to Embrace the Idea 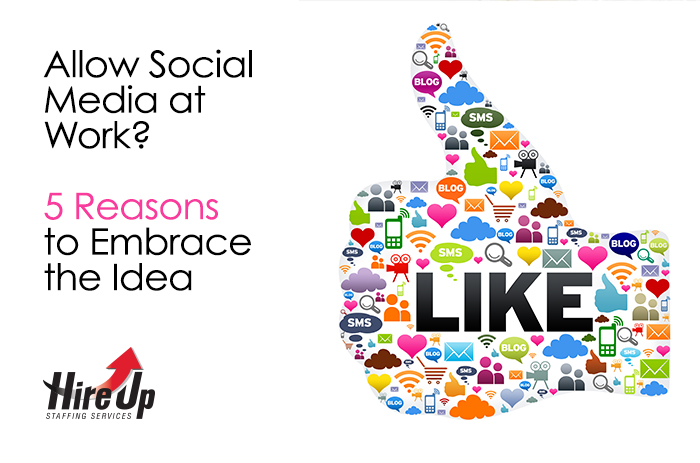 There are still companies today that are very strict when it comes to Facebook, Twitter, LinkedIn, and other social media sites. Often, they ban access to those websites, most notably during core work hours. Usually, the reasoning behind these strict policies is that employees won’t be able to focus on their jobs. However, newer studies are challenging this notion. Here are 5 reasons companies should embrace the idea of allowing social media at the workplace:

1.) It’s an old idea that just can’t be avoided. Unlike in the past when it was traditional for people in charge to micromanage and outlaw things they deem unacceptable, today’s 21st century workplace is mostly democratized.

2.) It’s self-defeating. In all honesty, most people nowadays own a smart phone, tablet, or some sort of portable device that connects to social media. Data plans and wifi hotspots make it nearly impossible for a totalitarian-style office, as workers can take a peek at their social updates while on a break or in the restroom.

3.) Social media is the new water cooler. Essentially, rather than old school conversations at the water cooler or taking a coffee break, people today resort to gadgets to get news, keep up with co-workers and friends, make social arrangements, and all other things. We live in a social media rich environment, which has both its positives and negatives. Banning social media, then, is like banning people from engaging in conversation with people at work. Imagine outlawing laughing or talking… that’s how greatly it can affect the workforce.

4.) It makes us more productive. Believe it or not, social media makes people open their minds, allowing us to group-solve big problems and yet also think independently. The fact that people are “watching” or knowing what you’re up to makes us change our minds for the better. In essence, banning social media from the workplace can make a person feel more empowered to seek employment with a more open-minded and innovative network of people or companies.

5.) It enhances our multitasking skills, which is beneficial for workers. In the same way social media encourages the idea of staying connected and handling a lot of things at once, the workplace needs such skills as well. In the past, people sat at work all day and went home to proceed with leisure. Today, both work and play are interconnected. So, occasionally posting to social media sites doesn’t mean a person’s not working or isn’t productive – it only means their brain is temporarily focused on something other than their job.