Boss Behavior: Top 5 Traits to Steer Clear Of, and What to Do Instead 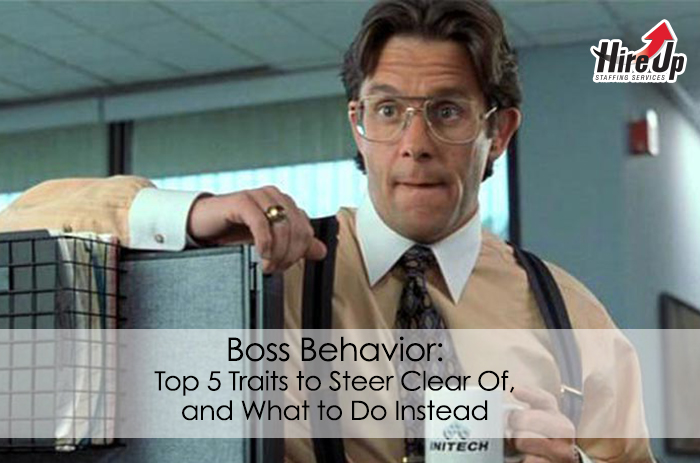 In recent years, there has been much focus on the boss-employee dynamic. Things in the workplace are

changing with the times, and the view of what a leader should be has gone from totalitarian to

However, according to a recent survey conducted by the LaSalle Network on 1,100 people, some offices

and bosses still have not changed from the traditional, thus deeming them as undeserving of the praise,

recognition and position that they currently hold.

Unfortunately, respondents of the survey feel negatively about their bosses, whether current or

previous, or both. Approximately 87% feel that way, or about 9 out of every 10 people, which is a really

because of such governance. In addition, a little over half of the respondents (51%) have admitted to

leaving a job because of their bad boss. What’s even more alarming is the fact that 55% of the

respondents never reported their bad boss to higher management in the company.

With the above survey-based statistics, what is the takeaway? Poor supervision and management is the

main reason people leave, and people feeling in the wrong when it comes to reporting terrible

leadership. They would rather find another job elsewhere instead.

What does that mean? Companies are losing good, talented people because of poor leadership. Here

are the top five characteristics that signify bad boss qualities, which leaders should avoid at all costs,

Whether you’re an employee or a manager, are you witnessing such behaviors in your workplace? If yes,

you should take action.

What Bosses Should Do Instead

Other than the obvious, which is to avoid the above mentioned traits, bosses should also aspire to do

 Communicate well, and communicate often. Listen to your employees and do something about

whatever the topic of conversation is.

 Lead by example. Effective leaders lead by doing rather than by pure talk.

 Create and maintain trust. This is especially true for those transitioning from regular employee

 Reframe relationships. It doesn’t mean you shouldn’t have fun, especially outside the office.

However, always remember that when at work, you still need to be responsible and lead.

 Find a mentor. Just because you’re a boss doesn’t mean you know everything – find a leadership

mentor and have him or her guide you, regardless if you’ve been boss for five years or five