Creating an Open Office Space Friendly to Both Introverts and Extroverts 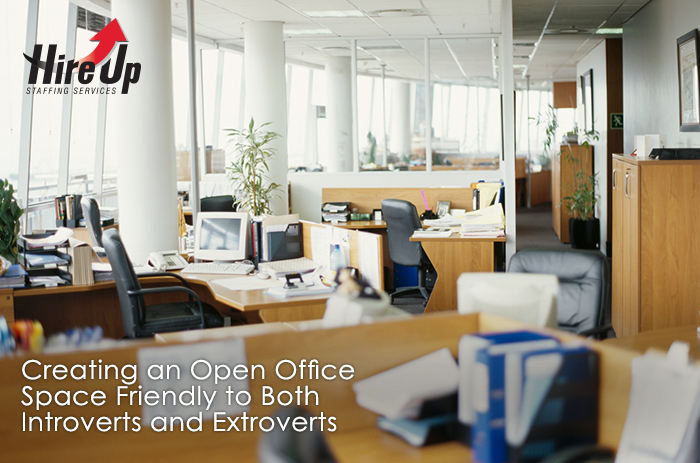 Recently, a lot of people have given attention to the Myers-Briggs Type Indicator test, with results-oriented articles popping up at websites left and right. Easily referred to as MBTI, the assessment is a questionnaire created by Katharine Cook Briggs and Isabel Briggs Myers that “measure psychological preferences in how people perceive the world and make decisions.”
Offices and group settings usually were told to work best if some decisions were based on MBTI personality types. This is why there is much debate on whether or not to have an “open office” at many workplaces. Some experts may argue that an open space is distracting and would kill productivity, but others beg to differ.
Break Down Walls, Figuratively and Literally
In an open office layout, there are ways to create levels of collaboration while giving people their own space, without the need to give everyone their own private room. In fact, rather than lessen distractions, private rooms might even encourage more frustration with modern electronic communication.
When done right, getting rid of physical barriers may even lessen e-mail overload. Rather than sending passive-aggressive e-mails, people can just approach whomever they need to talk to. It will be faster and even a little more personal.
An example of this is GlaxoSmithKline. According to the Wall Street Journal, GSK moved their workers from cubicles and offices into an open-plan type of space, and “email traffic dropped by more than 50%, while decision making accelerated by some 25% because workers were able to meet informally instead of volleying emails from offices and cubes.
Introverts May Like to Work Alone, but They Might Not Knock On Your Office Door
Tech PR company Highwire has an open plan office where the top executives sit with the rest of the staff. A publicist there, Grace Emery, is a self-proclaimed introvert. She says, “I would be so intimidated to get up and go into their office. When they’re sitting right there and walking by my desk all the time, it becomes much, much less intimidating.”
Open Offices, When Done Right, Encourage Collaboration
A lot of creatives are a pretty-balanced mix of introvert and extravert. Depending on the kind of work people do, an open layout often makes sense because anyone can put themselves out there when needed. Some experts would say that even those leaning more on introversion would be okay with interacting, as long as they do get some alone time to “recover” from socializing.
Establish Rules and Create Diverse Spaces
Yes, there may be some noise, interruptions, or even a lack of privacy cited as issues. However, we need to remember that offices are not a “one size fits all” thing – create diverse spaces where people who are more introverted can have some quiet time to focus or recharge.
Consider the adjacency of people and their teams as well. You will want a nice, continuous flow of energy where people can collaborate if needed, as quickly and as efficiently as possible. Yet inversely, remember to establish rules like making things clear as to which spaces are meant for which uses.

Let people know whether they may or may not use phones, have music playing, etc. Sure, it seems a little out there, but the bottom line here is having respect for coworkers and having some sense of protocol.