Holidays Affect Hiring – What Food Companies Should Prepare For 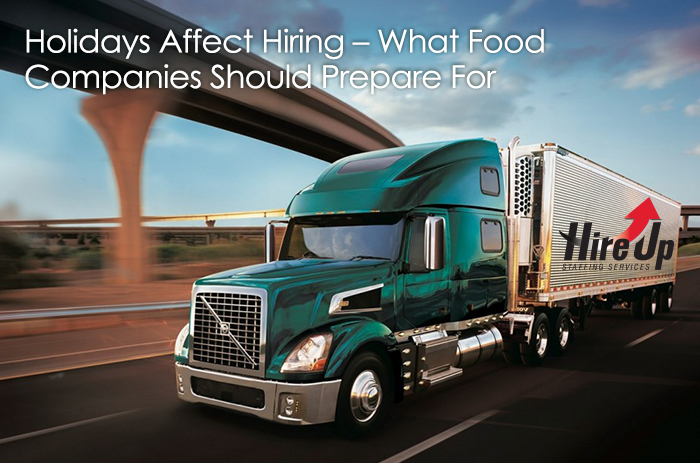 What does the fall season mean for the food production industry? A lot, apparently. Children are back in school, temperatures are getting lower, and many occasions, parties, and celebrations are just around the bend. Consumer goods companies that sell foods and beverages should up their production to make sure inventory is at par for the holiday season.
Warehouses not just here in California but all over the country are normally ramping up production at this time of the year. Not only does the quantity of production increase because of higher demands, but there are also plenty of special holiday-themed items like gift baskets, holiday designs, limited edition packaging, and the like.
How do companies increase volume efficiently during such a hectic time period? By hiring temporary staff. It makes the most sense since bringing temporary employees at peak seasons would ensure that production goes on uninterrupted. In the same manner, these companies would not be overstaffed during regular and off-peak seasons. It helps avoid productivity loss and also gets rid of the hidden overtime costs a company has to often bear during such times.
There are plenty of options a food industry company can hire, among which are:
Drivers
With additional deliveries during the holidays, food production companies often need more drivers than normal. During the busy holiday period, the cost-effective way for businesses to hire drivers is through temp staffing agencies. The staffing company can do all the behind the scenes hiring and interviewing so the company can spend their time keeping production as scheduled.
Production Workers
Production people are of course one of the main reasons product volume may increase. Other than being part of the production line, some workers are assigned to maintenance services, handling of materials, operating machinery, handling quality assurance, and many other things that would require additional staff during the peak season.
Administrative Staff
A food company’s administrative and accounting staff usually would suffice during normal times, but during the holidays their work load is significantly increased, sometimes to unbelievable levels. Additional temporary workers in these fields would greatly help in answering additional calls and increased e-mails, or to manage the increased sales, hyped schedules, and even travel arrangements for certain employees.

While it may seem as though it’s too early to think about the holidays, it’s important to know that preparation is already in full swing for many companies. During the pre-holidays, there are already plenty of operational changes involving staff that is better handled now than later.