Stand Out at Work in a Positive Way 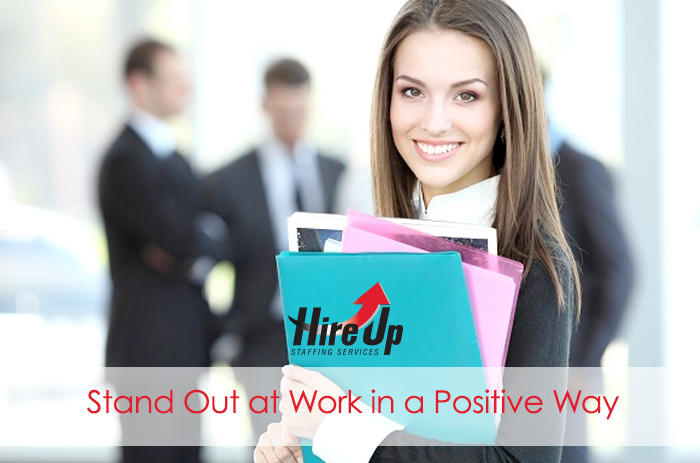 As if getting through interviews isn’t nerve wracking enough, trying to stand out at work sometimes gets into the nooks and crannies of people’s brains just as much. It is pretty safe to say that everyone wants to make a good impression, whether just starting out or in the middle of a lengthy career.

Thankfully there are many things you can do in order to stand out positively, and most of them don’t even require that much effort as you may think.

Bring a Positive Attitude to Work

This may seem like it won’t make you stand out, but believe it or not the positive attitude and vibes are usually not too popular in the workplace. That’s what makes it so valuable – the lack of it at work coupled with the fact that people easily get drawn to positive vibes. Be somebody who gives people a good experience at work rather than a person who brings nothing but negativity into the workplace.

In line with the previous point, make sure to avoid gossip at all costs. Sure, it exists at work no matter what you do, but it’s not an excuse to contribute to it. After all, who wants to be in the position of the person/s being gossiped about? Especially if things are getting out of hand and going too personal – no good can come out of gossip so it’s best not to partake in it in the first place.

It is important to communicate well and a huge part of it is listening. There’s such as thing as talking too much, so make sure the conversation goes both ways. Listen well and listen more than you talk, if possible. Learn from your coworkers and try your best not to interrupt whoever you are talking too.

Continuing the previous thought, remember that good communication with coworkers is key. Effective communication allows you to learn more about your job and your company, and thus adding to your success as well. You get to communicate with the people you work with and harbor great professional relationships that would last hopefully long after you move on to a different job position or company.

Flexibility is one of the most important traits in the workplace, and in an agile environment that most companies have, those who adapt on the fly stand out a lot more. These kind of people don’t crumble under pressure, allowing themselves to deliver results and perform regardless of sudden changes and being thrown out of their comfort zones.