Teaming up with Local Nonprofit Organizations to support a worthy cause

Giving back to the community in which we live is a core value at Hire Up Staffing Services and we encourage everyone at our company to find an association or organization they are passionate about and really get involved! We want our staff to stay engaged and the company to stay connected to the community. Our team is able to get involved and stay involved as we allow for flexibility in their work schedule to volunteer, attend meetings and events.

This past month has been a very busy month for our team! We participated in the Saint Agnes Women’s Club Diaper & Dollars Drive. This is an annual event that has been going strong for fourteen years. The mission is simple, collect 30 thousand diapers & 30 thousand dollars in 30 days. The kickoff for the event took place in late April where Rebecca Abell and Melanie Stayner participated in manning booths that were scattered throughout Fresno with other members of the Saint Agnes Women’s Club to receive donations. The booths were drop off locations for those wanting to give diapers, dollars or both and the kickoff was very successful!

The entire team also got involved and decided to have a friendly competition amongst each other and began reaching out to clients and candidates to help this worthy cause. We had several clients participate and bring boxes of diapers into the office and other clients made financial contributions. We also gave a prize away to the client that contributed the most by way of diapers and the most financially. The winner of the competition received tickets to the 2nd annual Le Petit Tea event that was also hosted by the Saint Agnes Women’s Club on May 20th at the Fig Garden Women’s Clubhouse. Our team also volunteered their time to working the telethon that was hosted by KSEE channel 24 on May 22nd, in which they made and received calls accepting donations to end the Diaper Drive strong and meet the goal of collecting 30 thousand diapers & 30 thousand dollars in 30 days. We are pleased to announce that the telethon was a huge success and the Saint Agnes Women’s Club was able to exceed its goal with nine days still remaining in the drive by collecting approximately five thousand dollars during the telethon that was only a few hours long. You can see the link to the new reports below through KSEE 24.

The Le Petit Tea was also a huge success and we had a few staff members attend the event along with their families and of course the winning clients of our Diaper Drive contest. This event was so much fun, there was so much amazing food and goodies and everyone was dressed to the nines! The Saint Agnes Women’s Club also held a raffle during the event in which all the items were donated by local business. The Le Petit Tea was a sold out event that I wouldn’t want to miss next year!

We are really excited to be members of the Saint Agnes Women’s Club and be a part of the cause it supports. These two events that are spearheaded by the Women’s Club are in support of the Holy Cross Center for women in downtown Fresno. This center has been pivotal resource for homeless and underserved women with children for 26 years. They provide, clothing, food, showers, employment training, educational assistance, counseling and referral services and of course diapers to those in need on a daily basis. Each day, they care for an average of 130 women and 20 children. In one month alone, the center provides 500-plus articles of clothing for women and families, 875 showers, and 400 loads of laundry and as many diapers as possible to those in need.

We were pleased to be able to join the club and do so much as individuals and as a company to support Fresno. Stay tuned for more community events and fundraisers that Hire Up is excited to use their talents to benefit.

Pictures from the La Petit Tea 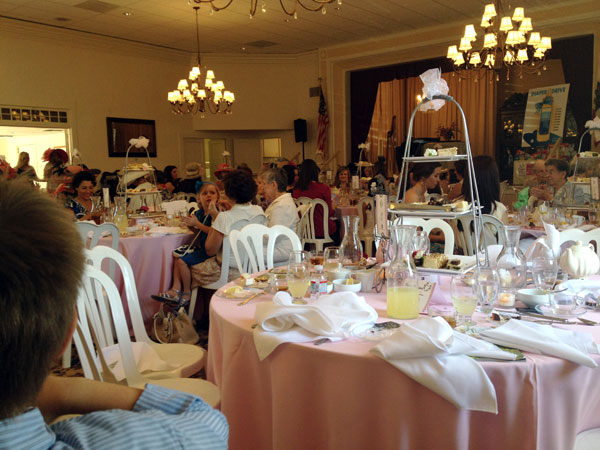