The Do’s and Don’ts of Asking for a Raise 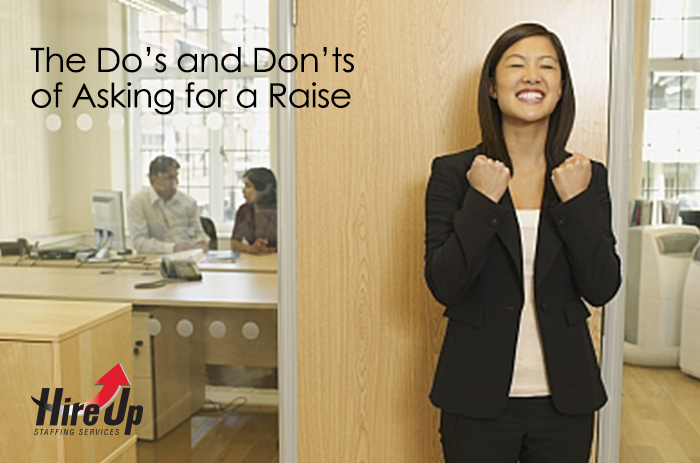 So you need more money, but you’re not sure how to do it? Read on for tips on how to properly ask for a raise. This process requires careful preparation, impeccable timing, impressive skills, and a backup plan (just in case).

It’s important to remember never to base your request just because of personal issues. People who successfully get a raise are superstar workers – they are the best of the best, the elite when it comes to doing their jobs exceptionally well.

Do: Ask for a Raise

It’s nearly impossible to get a raise without asking for it. Speak up when you feel that you have a case and the timing is right. Chances are, if you do deserve it, they will give it to you.

Don’t: Threaten Your Boss with Another Job

It’s all about proper negotiation. If you start threatening a company that you’re leaving because there’s “another job waiting” (whether it’s true or not), you might as well state the reason you’re leaving is because your boss is probably going to give you the boot anyway. No leadership in their right mind would ever make a counter offer because they were threatened an employee is taking another job.

Do: Find Out Your Value

Figure out what you’re worth, even if it means using online resources, salary surveys, cost of living comparisons, or even going on interviews elsewhere. If it’s possible and ethical depending on the company you’re with, look at compensation rates within your organization as well. Take a look at the job market and see how similar positions or people with like skills get compensated.

To begin with, most companies keep salaries confidential. And the main point? Your pay is a reflection of your own work, so therefore it wouldn’t make sense for your boss to pay you more based on your co-worker’s performance.

Do: Know Your Number

After all the research, consider all the factors in your life and figure out what you believe is a fair amount of money to ask for. Think of your current salary, what you found out about the job market, and how you’re living. Again, never mix personal issues when you do this – sharing your sob story such as needing a raise because you can’t make rent or you need to cover other personal expenses isn’t going to fly.

Don’t: Ask for Too Much

The bottom line is you have to do your research. Know what your value is! In addition, it’s unethical to just tell your boss about your market research as well. Remember, it’s not the market paying you – your company is.

Be confident, not cocky. Arrogance just won’t work. Confidence, on the other hand, is appealing and assertive. It lets the boss know you believe in yourself and your skills enough, and that you’re around because you love what you do and are grateful for it. It shows that you care about the organization and your boss, and you want to witness and continue to be a part of the company’s success.

Don’t: Ask for a Raise After a Bad Performance

Performance reviews are there for a reason, so it would be seriously strange to ask for a raise around the time your boss called you in to discuss poor performance ratings. Stick to your accomplishments. Companies would gladly pay more to people who add great value to the company.