The Workplace Gossip Girl: The Good, the Bad, and the Dealing with It 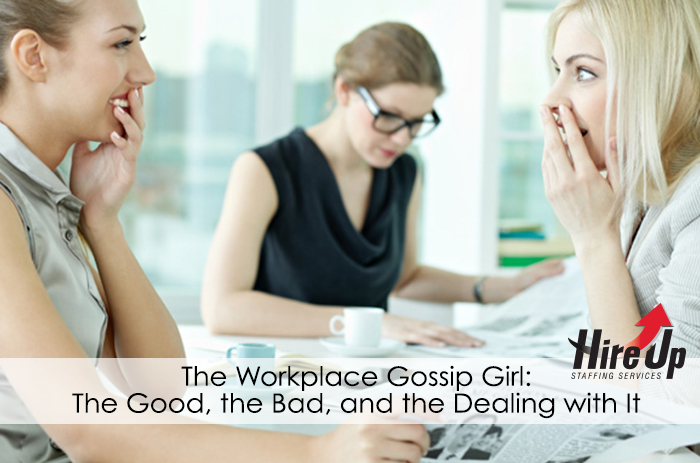 Whether part-time or full time, everyone with a job spends a significant amount of time in the workplace. This is the reason people need to know how to spend time wisely. Granted, there’s always some down time in between grueling work tasks, one thing is certain: people talk at work. It’s not just work-related things we talk about, because there’s also bound to be a bit of office gossip somewhere in there.
In Defense of Office Gossip
Gossip in general has a negative connotation, but its actual definition is pretty neutral. Originally, it meant just chatting with “godsibs,” a peer equivalent of godparents or people we are close to. In modern usage, however, gossip is more of talk (usually in a negative light) about people who aren’t around.
This is probably the main reason gossip is looked down upon in society, especially in the workplace. Most gossip today involves half-truths, innuendos, and hearsay rather than just regular chit-chat. However, it’s not that black and white. Research in recent years are starting to defend that there are positives about it.
The Good
Talking at work about coworkers doesn’t have to be a negative experience. Groups of workers who have a tendency to gossip or have frequent small talks at work often become close nit. The act of keeping constant communication, even if only for a short time each day, promotes camaraderie. It even provides a sounding board for improvement for certain people and processes at work.
When strictly speaking, gossiping can only be a bad thing if people discuss solely the negative things people have done or spreading rumors that are there purely for rabble-rousing. Talking with coworkers about the mundane and the irksome things about their jobs gives a voice for the voiceless. In fact, when thoughts are shared with the right people, it can often induce change.
The Bad
Yes, gossiping isn’t now just received as loose talk. However, there will almost always be a misuse of gossip in the workplace. There are fine lines that should never be blurred or crossed such as talking really negatively about your boss or any other person of authority.
Experts recommend that if you have an issue with your superior, it’s better to talk with them directly rather than them hearing half-truths from someone else. Even if your performance at work is stellar, when your boss finds out that you have been talking really badly about them it will most likely affect your employee-employer relationship. It adds tension and damage to your credibility – you want your boss on your side and promoting your skills.
In addition, things like personal information, highly sensitive company or industry news such as company mergers, have to be kept to yourselves – else it could potentially cost you your job.
Dealing with It
Bad gossip usually stems from jealousy, lack of confidence, or low self-esteem. But what do you do if you’re on the outside looking in? If you suddenly find yourself as the subject matter of your workplace’s water cooler small talks, fret not. Experts say that if you’re the hot topic, you should survey the scene and track down the originator of the false news.
Usually, when you confront the root of the gossip, the fact that you’re standing up for yourself will make them stop (or even move on to the next topic). Confront him or her in a discreet and polite way rather than making a scene out of it. However, tread lightly – don’t get emotional and make sure that you know exactly what people have been saying, and that the person is the actual source of negative hearsay.

If you cannot trace the originator, experts recommend approaching your company’s human resources department on how to handle the situation. This is especially true and necessary if it is affecting your daily tasks at hand. It’s important to be direct and sensitive about it, while handling yourself with grace.