Things to Never Say: What to Never Ask When You Want a Raise (Part 2) 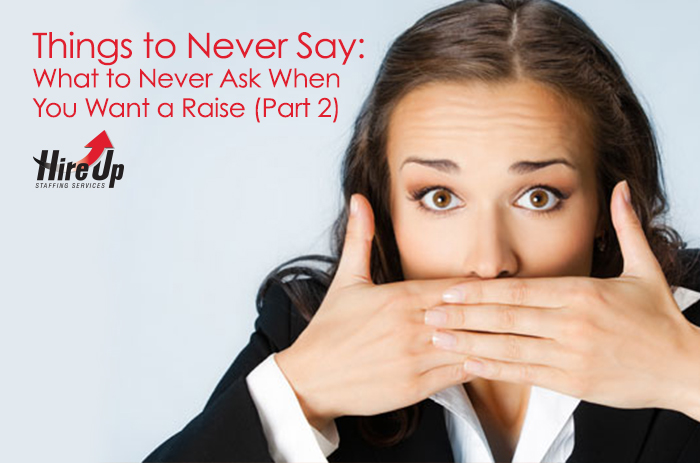 In a previous post, we mentioned a few things one should never ever say whenever asking for a raise. No matter which kind of approach you choose, one thing should be clear: you as an employee will need all the information possible in order to state your case. You should know what you and your job are both worth.
To continue with the previous post’s discussion, here are 5 other things never to say when you want a raise:
“I have done everything I was supposed to be doing.”
By definition, a raise means getting extra – an amount on top of what you were originally offered. With that in mind, it doesn’t make any sense to ask for more money simply by doing the minimum of what you’re being asked for in your position.
Remember that when asking for a raise, you are asking your employer to increase what you’re being paid – they are breaking from what was negotiated – so let them know why they should do that and why you deserve it. If you say it’s because you’re doing what you’re supposed to, you probably won’t receive that raise nor should you have asked for it. Salary increases are for high performers – people who are committed to providing excellence.
“I am having personal problems.”
There are many things deal with like having a baby, taking care of a sick relative or paying mortgage. Yes, while they are all important and would make one think it makes them deserve a raise automatically, the honest truth is that they do not factor into whether or not you should get an increase.
We need to remember that when trying to convince your employer to invest even more in you, you would need more solid reasons than that. So, if all your hopes on getting a raise rely on personal reasons that do not even relate to your job to begin with, you’re automatically at a disadvantage.
Instead of focusing your professional accomplishments, you are basically telling your boss you want more money because of a sob story. Yes, many leaders are sympathetic, but that does not (and should not) translate into a higher pay scale.
“I want *insert obnoxiously high amount of money*”
Never ever ask for a ridiculous amount of money, even if you did all the right things like timing it properly and focusing on professional accomplishments rather than personal issues as a reason, eventually you will get asked how much money you actually want.
What then, is the correct answer? There are many factors that will determine how much you should ask such as your company’s financial state and how your salary compares to others in your field. Do your research, exercise common sense, and ready your best judgment.
“I recently found out that John makes more than I do.”
If there’s one thing you need to keep in mind, it’s this: never compare yourself to another coworker. This doesn’t just apply to salary but also to skills and accomplishments. This is a very horrible idea as it makes you look like a gossip hound who snoops around just to know a coworker’s salary.
On top of this, it also makes you look whiny and petty – to begin with, John may have several advantages over you such as more training and education, or perhaps he is a better negotiator when he was being interviewed for his position.
Lastly, remember that this is your raise request and performance review – prove YOUR self, show that you are worthy of what you are asking for. Focus on your strengths rather than complaining about how much money someone else makes.
“If I don’t get this raise, I’m out of this place.”
An ultimatum is the ultimate no-no when asking for a raise. Sure, it may work sometimes, and while some experts might even say use it as a bold approach. However, there are other, better, less risky methods.

However, if you do, actually use this line, make sure you are really prepared to follow through on your threat. Otherwise, not actually leaving after you have been turned down for a raise will create dire consequences – your boss will realize you are a liar, and you have no more future negotiating leverage whatsoever.